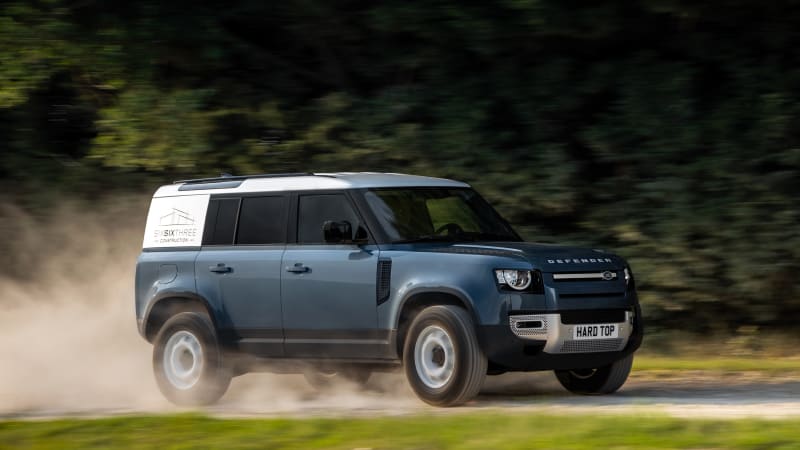 Land Rover is hoping to silence critics who claim that the Defender’s upscaling alienates commercial users by releasing an entry-level model called the Hard Top. It’s a cheaper and relatively basic variant of the SUV, designed to feel more comfortable around workers fixing power lines than hauling a family on a weekend camping trip.

We got a glimpse of the Hard Top when the Defender made its world debut at the 2019 Frankfurt Auto Show, but Land Rover chose not to say much about the model in order to focus on more expensive and more profitable variants which are better. aligned with its luxurious image. With those out of the way, the firm explained that the Hard Top (a name that in Land Rover’s glossary dates back to 1950) rides on the exact same aluminum-intensive unibody platform as the Defender, and it is being developed by its Special Vehicle Operations Division. Short and long wheelbase models dubbed 90 and 110, respectively, will be available.

Land Rover has yet to release any technical specs, but it’s safe to assume that this version of the Defender won’t have a V8; you are more likely to find a turbodiesel engine under the hood. Both models will receive independent steel suspension, although the 110 is offered with adaptive air suspension at an additional cost, and they will be able to tow up to 7,700 pounds when properly configured. Four-wheel drive will be standard.

Steel wheels will underline the Hard Top’s commitment to functional design and form, and Land Rover will replace the rear-most window with a metal panel where buyers can paint their logo and / or contact details. business. While interior photos remain under wraps, Land Rover explained that both Hard Top models will offer two front seats in their most basic configuration, but an optional center jump seat will increase their seating capacity to three. Motorists who need second or third row seats will have to move up the trim level hierarchy, as the Hard Tops were developed for freight transport. The rear opening is large enough to swallow a standard size pallet.

Land Rover can’t go this far in its quest to remove content from the Defender, and the Hard Top remains considerably more high-tech than the outgoing Defender. It is compatible with Apple CarPlay and Android Auto, it can receive live updates and it is equipped with a range of electronic driving aids like a ClearSight rearview mirror, an advanced towing assistant, a 360 degree camera. , as well as Terrain Response 2. In the original Defender, driver aids were limited to pedals, a handbrake lever, a shift lever, and a steering wheel.

In the UK, the Land Rover Defender Hard Top will go on sale in late 2020 with a base price of Â£ 35,500 plus tax, a sum that works out to around $ 44,000 at the current conversion rate. That figure makes it about Â£ 5,000 (around $ 6,200) cheaper than the cheapest non-commercial variant sold in England. Pricing for the US market has yet to be announced, and we don’t know if the Hard Top will be sold on this side of the Atlantic. Autoblog has contacted Land Rover for clarification, and we’ll update this story if we learn more.

When it lands, one of its main rivals will be the Ineos Grenadier, which is developed by one of the world’s largest chemical producers. It looks like the truck will be much closer to the original Defender than the current generation model, in part because it will receive chassis-mounted body construction and solid axles. Then again, it is unclear whether the pomegranate will be sold in the United States, or if it will be exclusively available across the pond. Production is expected to start in Wales in 2021.