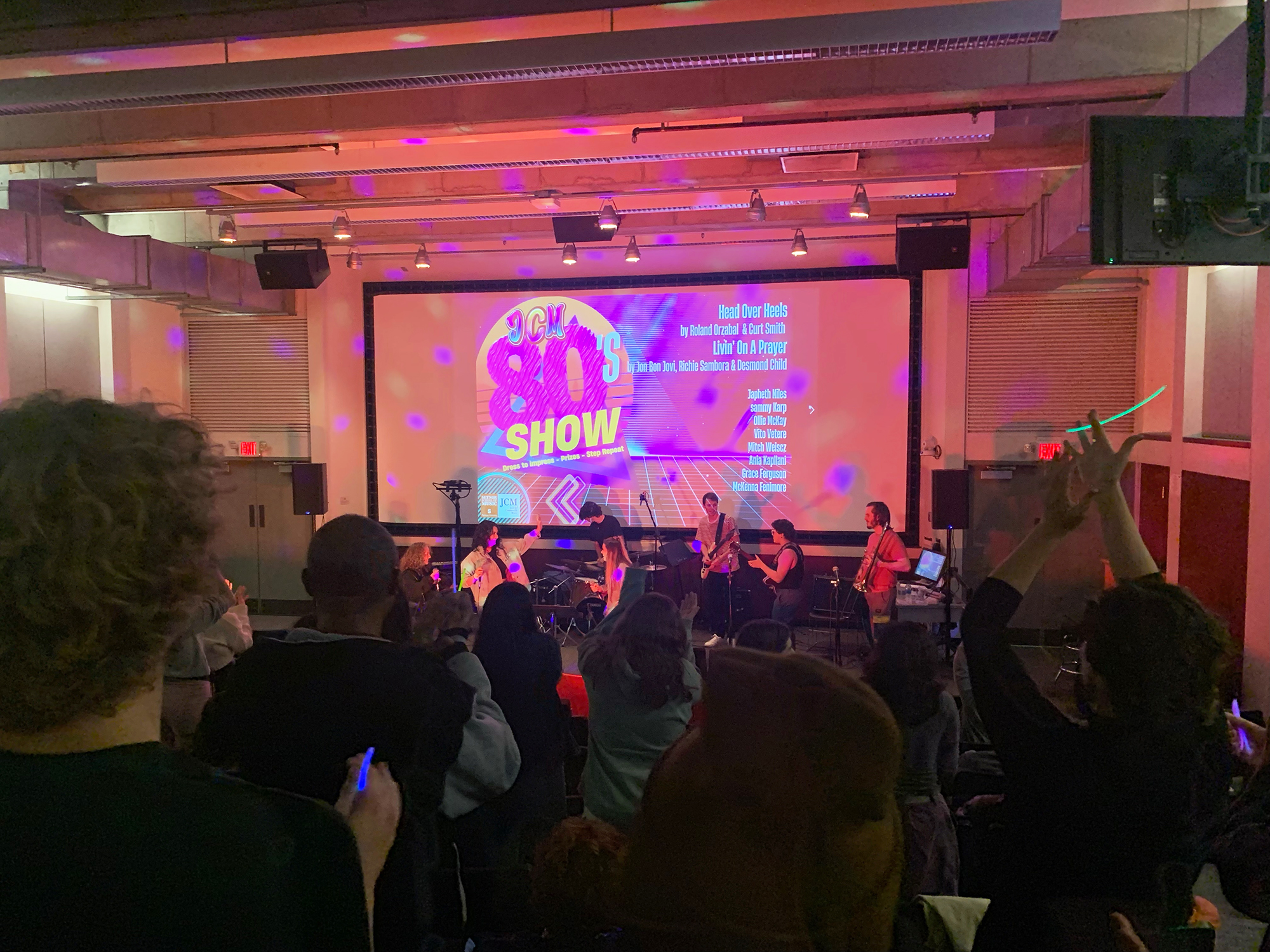 Filled with sparkly dresses, leather pants and plenty of darlings, the scene at the Shaffer Art Building last Friday was a blast from the past.

“We want you to dance,” Marianne Solivan, an assistant professor at the College of Visual and Performing Arts, said as she tossed glow sticks into the audience. “Hit the aisles if you have to, do what you gotta do!”

Presented by SU’s Jazz and Commercial Music Program, Eighties Night was an informal concert featuring artists of various ages, from freshmen to graduate students. The students were grouped into groups and each performed a short set in the Shemin Auditorium.

The program focuses on jazz and more formal events, so this show was a departure from their usual performances, said freshman singer Grace Ferguson. Solivan said at the start of the show that the event was purely fun and a lighthearted way to start the semester.

“This show is meant to be a fun way for returning students to get a chance to perform,” singer Jason Suris said. “These events are important to keep our small CWY community together.”

The show was originally intended to be a small fifteen-person production. But the students’ passion for that era of music made the ’80s JCM show a vibrant celebration, with five bands playing ten songs, said Solivan, who organized the event.

Drummer Alex Talarico, a senior on the program, said the ’80s show was a breath of fresh air from the usual lineup of jazz and funk tracks.

Ferguson sang “Livin’ On a Prayer” and “Head Over Heels” for his band’s set, then provided backing vocals for “Through the Fire” and “In the Air Tonight” for another band. Solivan pointed to Ferguson, as well as Kathryn Lee and Nancy Dunkle, for acknowledging that they were freshmen and new to the program.

“I think the arts, and especially music, are so important because of their power to bring people together and convey emotions far beyond what words can convey,” Talarico said. “And on a less serious note, sharing and playing music with others is so much fun.”

The audience was just as involved as the performers, applauding Kathryn Lee and Nancy Dunkle’s rendition of “Love is a Battlefield” and singing along to “Livin’ on a Prayer” by Ferguson and Ania Kapilani.

Audience members Angelina Lim and Aaron Cournoyer said they love the high-energy musical events because they’re a different type of entertainment than most other shows in Syracuse.

They said they would like to see more of these events on campus and that the university should publicize them to a wider audience.

“I’m here only because (my friend) told me about it,” Lim said. “I wish there was more publicity for these things.”

After their performance, Solivan said she was impressed with how the groups fit together. She said she was proud of the performers for making this possible after weeks of rehearsal.