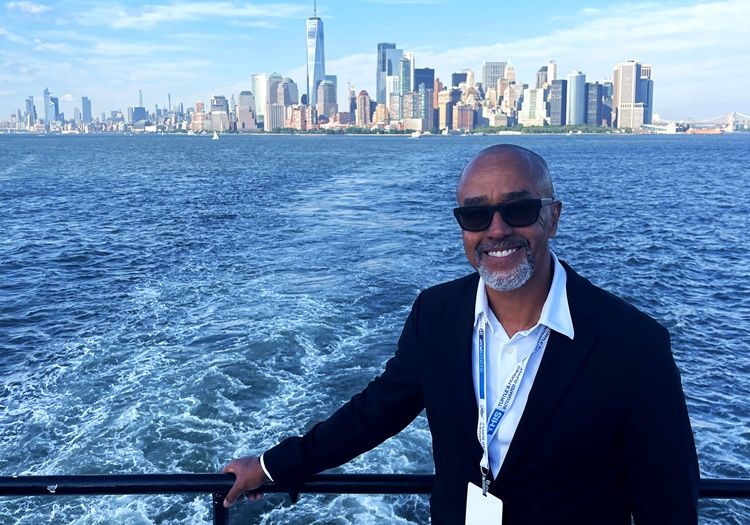 These series gets inside the heads of CRE decision makers, the people who shape the industry by setting investment strategy, workplace design, diversity initiatives and more.

When James Pitts founded Greenwood Commercial Real Estate Group last year, he focused on staffing his new corporate real estate services company with seasoned minority and black professionals with the goal of becoming the one of the largest minority-run businesses in the United States. Pitts is based in Atlanta. but is now licensed in 22 states and has offices in Detroit; Dallas; Memphis, TN; Miami; Washington D.C.; Denver; Los Angeles; and Philadelphia.

Pitts has had a storied career in commercial real estate, with 26 years working for names such as JLL and Grubb & Ellis. Even before that, Pitts – an engineer by trade – worked for Motorola and led workplace strategies with Johnson Controls Global Workplace Solutions during his earlier career.

The following has been edited slightly for style and clarity.

Bisnow: Baron Rothschild once said that “the time to buy is when there is blood in the streets”. Where is the blood today?

Pitts: We are currently at an inflection point. With the Fed trying to contain inflation by raising interest rates and the uncertainty Europe is facing with the Russian-Ukrainian war and the effect on food and energy costs, we are in choppy waters. . Additionally, for the second time this year, the People’s Bank of China announced it would reduce the amount of foreign currency banks must hold to potentially reduce weakening pressure on the yuan, which has fallen to lows of two years against the US dollar in the last few weeks.

In domestic US commercial real estate markets, there is uncertainty around office assets as occupiers try to figure out where the “new normal” will settle in a post-Covid world. There are a lot of empty/sublet spaces on the market that are not prominently displayed. Amazon is reducing its industrial footprint. FedEx has just announced that it notices a slowdown in its activity on the way to the holiday season. Housing cools quickly, which means that recently purchased ones may be upside down. The next six to twelve months will be very interesting.

A bright spot is what is happening around EVs with the influx of business and investment in technology and infrastructure. It will be a growing industry as the effects of climate change continue to make it clear that our current way of consuming energy is unsustainable.

So, for now, it’s better to watch and wait for an opportunity than to enter the market and become a victim that others take advantage of.

You can quote me on this: “If there’s blood in the streets, don’t come out too early and add your own.”

Bisnow: What is your most controversial opinion of CRE and why are you right?

Pitts: Companies sometimes view EC Small Business Tier 2 relationships as a better opportunity than it actually is. Unless the Tier 1 client and partner engage fully and thoughtfully, it becomes a tick box exercise, with the Tier 2 partner potentially receiving less desirable projects and working three times as hard for the same dollar than the Tier 1 Partner. This arrangement does not stimulate the expansion of the Tier 2 Partner’s business or the transformation of the CRE industry into a more inclusive environment.

Bisnow: If you weren’t in real estate, what path would your career have taken?

Pitts: It’s difficult. I’ve been in real estate for so long it’s hard to think of anything else. I was lucky enough to play professional basketball in Europe after college, but I chose to work as an engineer, and then I played basketball for three or four hours six days a week for the next 20 years and more for free, so maybe I should have gone to Europe. I love music of all types except classical, and I used to do big parties in the 70s, which was awesome. But my enduring passion is traveling and meeting new people, so if I could do anything it would be to work as a travel photographer and get paid to travel and engage with people all over the world.

Bisnow: If you could make one change to the industry, what would it be?

Pitts: Challenging the perception that selecting the largest global companies is always the safest and best choice for CRE decision makers. What ultimately matters is the quality of the team you work with.

Bisnow: What is one thing you would do differently from the start of your career?

Pitts: How many bites does it take to get to the center of a Tootsie Roll Pop? One, invest in real estate earlier. Two, get into business earlier. Third, talk to wealthy people about how they are creating generational wealth earlier.

Bisnow: As a leader, how do you decide who is worth coaching and who just isn’t?

Bisnow: What do you think of the metaverse? Is it relevant for CRE?

Pitts: In my opinion, the metaverse is ideal for games, hobbies and learning. I have an investment in a metaverse company. I think people with vested interests in selling the next thing can sometimes overextend the usefulness of the metaverse.

Maybe I just don’t get it, but I’d rather be in Valencia, Spain, drinking real wine, eating amazing meals and walking the streets feeling the cool winds of the Mediterranean Sea swirling than wearing a headset in my living room that needs to be recharged every few hours. As Chris Rock said, you can drive a car with your feet instead of your hands, but why would you?

Bisnow: What do you think are the lasting impacts of the pandemic on CRE?

Pitts: The unexamined expectation and requirement for people to come into the office to work has been eliminated in some cases. Now that people have the experience of working from anywhere and living a mixed life with results-oriented work results, it can be difficult to put the genie back in the bottle.

Bisnow: As you know, there’s a massive conversation going on about advancing more people of color and women in the C-suite. What are you doing to respond to these voices and this movement within your own organization?

Pitts: Currently, the focus seems to be on entry-level to mid-level positions and not C-suite level changes. Greenwood CRE, by its nature and design, addresses this issue. This conversation has been going on for over 20 years and there still seems to be little progress in this area. Once people are truly willing to make this change, it will transform quickly. Until then – it’s a circular conversation – we’ll come back in that direction.

Bisnow: So that’s the weekend interview. What is your typical weekend routine?

Pitts: Until three years ago, every weekend was spent driving to football games all over Georgia as the coach of one of Georgia’s top teams. After retiring from football, I work most weekends to prepare for the following week. Before work, I participate in a few training sessions and a short and long run on Saturday and Sunday mornings.

When I get the chance, we head to Lookout Mountain near Chattanooga or Asheville, North Carolina in our Airstream RV, sit under the stars, disconnect for a few days, and if we’re lucky, watch a football game or two on my iPad.

MEDIA ADVISORY: The Next-Generation Business Model – Questions You Should Ask Yourself