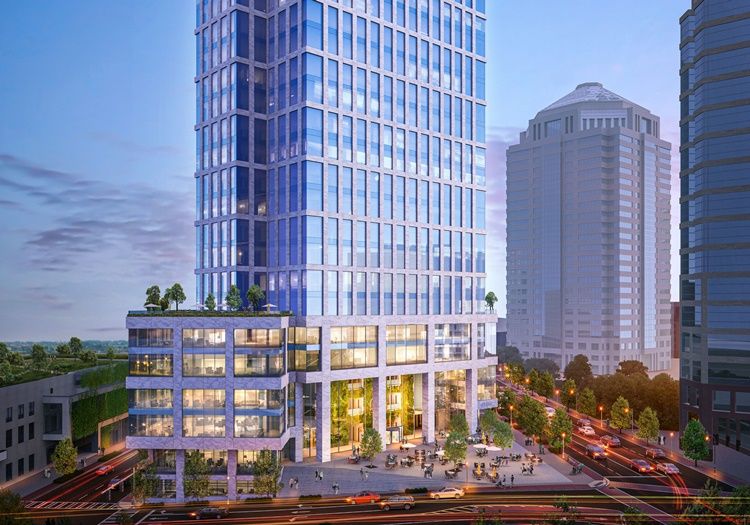 After more than two years of delay, John Dewberry could finally start work on the major overhaul of his Campanile building.

Courtesy of John Dewberry, Peter Logan and Gary O’Connor in collaboration with Smallwood

Rendering of the renovations of the ground floor of the Campanile building.

Dewberry Group, led by a former Georgia Tech quarterback and one of Atlanta’s most well-known commercial real estate personalitiesis looking to add six new stories to the top of the 455K SF office tower at 1155 Peachtree St. and hopes to begin work this fall, project officials said at a meeting of the Downtown Development Review Committee Tuesday evening.

The redesign of the tower, which would also include eight floors of new commercial space around its base, is expected to take two years, Smallwood partner Michael Brown, architect of the project, said at the meeting.

In all, Dewberry would add a total of 265,000 square feet of office and 39,000 square feet of retail to the tower sandwiched between Peachtree Street and Piedmont Avenue off 14th Street in the heart of Midtown, and its height would rise from 21 to 27 floors, according to the request of the DRC.

“There’s a demand for that,” Brown said when asked by DRC board members about potential tenant interest in Campanile.

The MDRC, which offers the city its initial view on new projects in the city center before developers seek final approval, plans to recommend the project pending minor changes.

Dewberry’s executive vice president of finance, John Freeman, said bisnow after the MDRC meeting that the developer will begin construction of the addition without waiting for pre-letting, but that the company has “construction financing lined up”. Freeman declined to give further details.

brown said bisnow how Dewberry plans to add floors to the top of the tower: a contractor will add concrete pillars to the existing steel frame on the top floor, then erect additional steel bars to frame the new floors above. Although not unknown, he is unusual for developers to add additional floors to existing skyscrapers, especially since more than 80% of the world’s commercial towers have built since 9/11.

This is Dewberry’s latest push to redevelop Campanile since it acquired the former BellSouth tower in 2010 for $36 million. BellSouth left in 2007, and more recently SunTrust Bank liberated five floors after it merged with BB&T, becoming Truist in 2021. The building’s remaining tenants today are Pandora Music Co. and Northwestern Mutual, according to the Atlanta Business Chronicle.

In December, Dewberry refinanced Campanile with a debt of $75 million from ACORE Capital, Reported Trade Observer.

“We are thrilled to fund a premier local sponsor with extensive experience in the Atlanta market and cutting-edge vision for this asset,” ACORE Origins Director Eric Ramirez told CO. “This is a high quality investment opportunity for ACORE in a location we believe in for the long term, with very strong local sponsorship within the Dewberry Group.”

Renovation of the Campanile began in 2019, but stalled a year later, leaving the base of the tower unfinished. Lack of work led the City of Atlanta Bureau of Buildings to label it a project abandoned in Octobersubjecting Dewberry to potential code enforcement violations.

Dewberry told the AJC last year that the work delays were due to many factors, including disputes with the company’s general contractor over price estimates, but that work on the project was due. to resume.