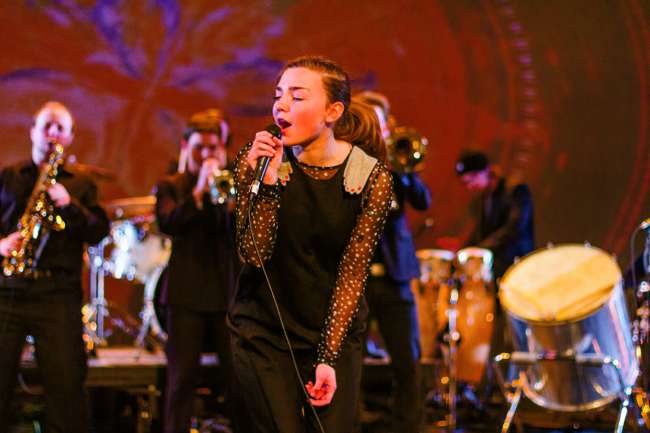 Students from UVU’s Commercial Music Department held a concert at the Ragan Theater on March 2 to kick off the department’s concert series. With the use of a fog machine, captivating visuals, lights, and professional musical equipment, the department has created its own rock and pop concert experience on campus.

The show consisted of two bands, Jealous Jeanie and Sonic Exchange, who each played their own roles, performing and singing with the energy any music star would. The show featured covers of a variety of bands from different musical genres, including Muse’s rock anthem ‘Stockholm Syndrome’, the playful ‘I Wanna Dance with Somebody’ by Whitney Houston and the dance track ‘Can’ t Stop the Feeling â€by Justin. Timberlake. Between the changes of scenery, Brian Shepherd of Voiceline took a moment to perform his signature beatboxing and teach audiences how to do it as well. The concert ended with covers of popular Imagine Dragons songs “Believer”, “It’s Time” and “Radioactive”.

Educational advisor Todd Sorensen, who has over 25 years of experience in the music industry, was delighted to offer students the opportunity to perform and expand their musical abilities. Sorensen said most universities don’t have programs like this with contemporary music as part of their music department.

â€œWe thought we would take this idea of â€‹â€‹creating a symphony, but instead of being violins, violas, trombones, trumpets, percussion, we would use different aspects of the school of the arts,â€ Sorensen said.

The Mixtape LIVE concert was a prelude to the symphonic concert that the arts department will be hosting on March 30. This will be the start of a series of concerts that will showcase the talents of UVU students at the School of the Arts. The music for Mixtape Live has been chosen to give audiences a taste of the selection that will represent the vocal section at the upcoming symphonic concert. The concert will feature hip-hop dancers, visual arts, theater and various sets. He will also collaborate with aerial dancers from a company in Salt Lake City directed by Darla Davis who have performed at Cirque du Soleil.